Earlier this month the Aid for Starving Children Emergency Relief team traveled across the globe to one of the most dangerous and impoverished regions of the world, the Horn of Africa. I traveled with one of our dedicated Board Members and our Emergency Relief Director, to Ethiopia, South Sudan and Somali Land, to meet with our local project directors and help provide emergency aid to starving children and displaced refugees across these regions.

Preparation is one of the most vital aspects of any emergency relief trip. Our team has to be prepared for any- and everything, and accept that things will likely not go exactly as we have planned. We always have a plan A, B, and C in place in order to ensure that our ultimate goals–to help save lives and provide for those in need– are achieved. Even with all of my mental and psychological preparations, I know that the conditions and suffering I will witness will be shocking, especially the sight of diseased and malnourished children. It’s quite encouraging, however, that on this trip I will be with two of my closest friends. We are all so thankful to have the opportunity to engage in our passion of caring for children in need. 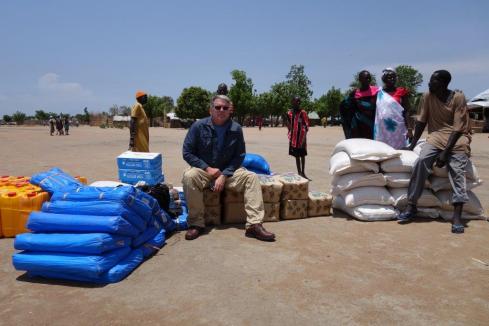 One of the most physically and emotionally taxing periods of the trip, was our endeavor in to South Sudan. Having traveled into South Sudan multiple times during their initial attempt to secede from North Sudan and having seen these people gain their freedom from such a repressive and cruel regime; and now, seeing this new nation again ripped apart by warring tribes, is heartbreaking. Innocent people are not only suffering from lack of water and food but the violence of a civil war. They are desperate for help. 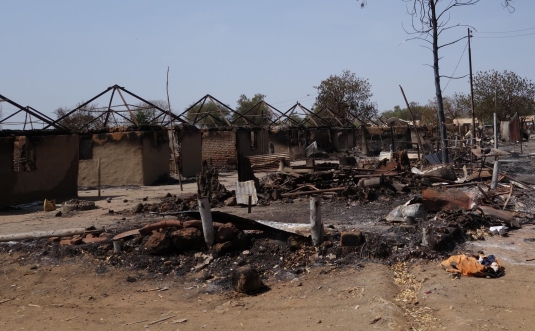 We traveled to several war torn villages throughout South Sudan, and the sheer devastation within the country is shocking. Hundreds of thousands of women and children have been forced from their homes and are constantly on the run. I spoke with one woman whose story was tragic, yet at the same time, while she spoke with us, she exuded such courage, grace, and a nobleness that was humbling. When the fighting broke out, she ran to the nearby swamps, where she hid with her children for 5 days.  I can’t even begin to understand how terrifying that must have been for her, especially knowing her husband had just been killed. She is not alone in stories like this, there are countless families constantly fleeing conflict without a stable source of food or clean water. 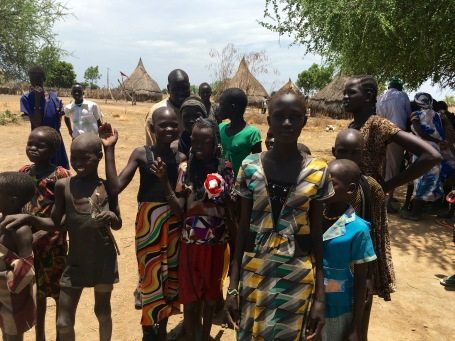 We located several villages which had mass influx of families who have been displaced from their homes, on the run from the devastation of war. In speaking with local leaders, we learned that the population of one village had grown from around 42,000 residents to about 92,000 with the influx of displaced families– and more are streaming in every day. This village of 92,000 had only two water wells and extremely limited resources for food. Women lined up daily to wait for hours and hours to have the opportunity to fill their containers with a few gallons of water. 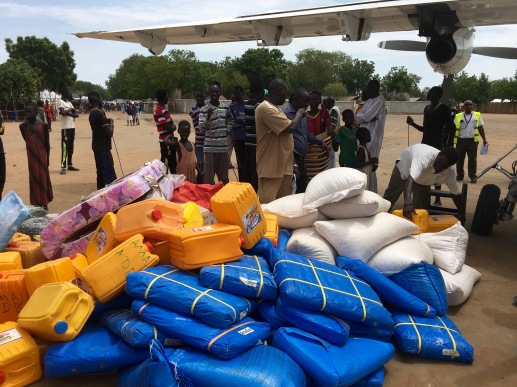 I don’t have the words to describe the impact of being with people suffering such deprivation. All the while having to remain vigilant every moment of every day; in case a battle breaks out. I grieve for them, fear for them, and hope to do more for them. Nevertheless, I am deeply grateful for all we were able to accomplish on their behalf. 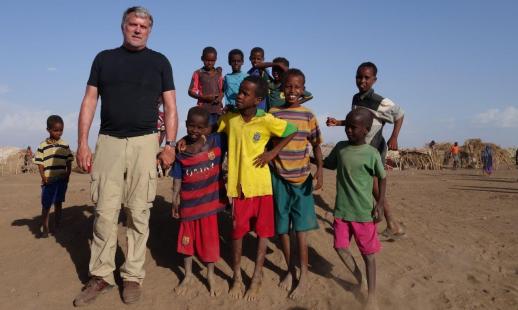 Thanks to you, our caring ASC donors, during our relief mission in this village we were able to provide several tons of maize, wheat, sorghum, soap, water containers, tarps for shelter (plastic sheets), mosquito nets, fishing line and hooks, plastic chairs and 3 tables. The smiles of relief and appreciation on the faces of woman and children were breathtaking. In that moment, despite the underlying fear of a nation suffering from war, all seemed calm. The mother’s could relax  knowing they had food to look forward to and the children could play and smile as all children should.

Thank you and God bless you,